2019 full-length album of Finnish dungeon synth.  Available in both brown/black swirl and green/yellow neon.  Select your preferred color from the drop-down box.

Hailing from Finland, DRUADAN FOREST originally formed in 1998 and released three demos before receding into the shadows later in 1999. In 2016, the entity was reactivated and released an EP and then two albums and, most recently, a split album with THE TRUE WERWOLF. Of course, between the two eras of DRUADAN FOREST, sole creator V-Khaoz was not idle, prolifically playing drums for such bands as Azaghal and many others as well as his various solo-projects – namely, the almighty VARGRAV, who’ve almost singlehandedly helped revive the symphonic black metal subgenre.

However, as DRUADAN FOREST, V-Khaoz explores the most mystical, folkloric realms between the shadows of black metal and pure ambient music. Some might brand his approach as “dungeon synth,” but such a revisionist appelation sells short not only the man’s decades-deep investment in these realms, but more so that DRUADAN FOREST thus far have safely eluded simple genre categorization: although most of the themes/textures stay consistent – fantasy, wonder, darkness, heroism, general grandiosity – no two recordings during Mk II of the band sound exactly the same.

Following that epic synth-heavy split with THE TRUE WERWOLF in 2018, DRUADAN FOREST delivers a more plaintive and stripped-down expression with the aptly titled Dismal Spells from the Dragonrealm. Whereas the full-length predecessor The Lost Dimension understandably maintained a slightly more optimistic air, here with Dismal Spells from the Dragonrealm does V-Khaoz plunge deeply into the darkest past, evoking dead-silent castles buried by time and dust. This expression of DRUADAN FOREST is arguably his most dungeon synth-oriented thus far, but within those stricter, more traditionalist parameters does he create entrancing spells that duly transport the listener to forgotten realms. One need only give the album’s four component song titles a cursory read to see the landscapes that will soon unfold – “Unsung Spell of No Solace,” “Enthralled by Majestic Winters Eternally,” “The Seizure of Power in the Luminous Lands by the Hands of the Stalking Fiends,” and “No Stars Upon the Black Sea of Macrocosm” – with each track topping 16 minutes, altogether making for a 73-minute journey that feels even vaster than its epic length suggests. 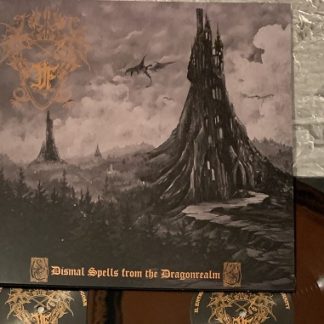